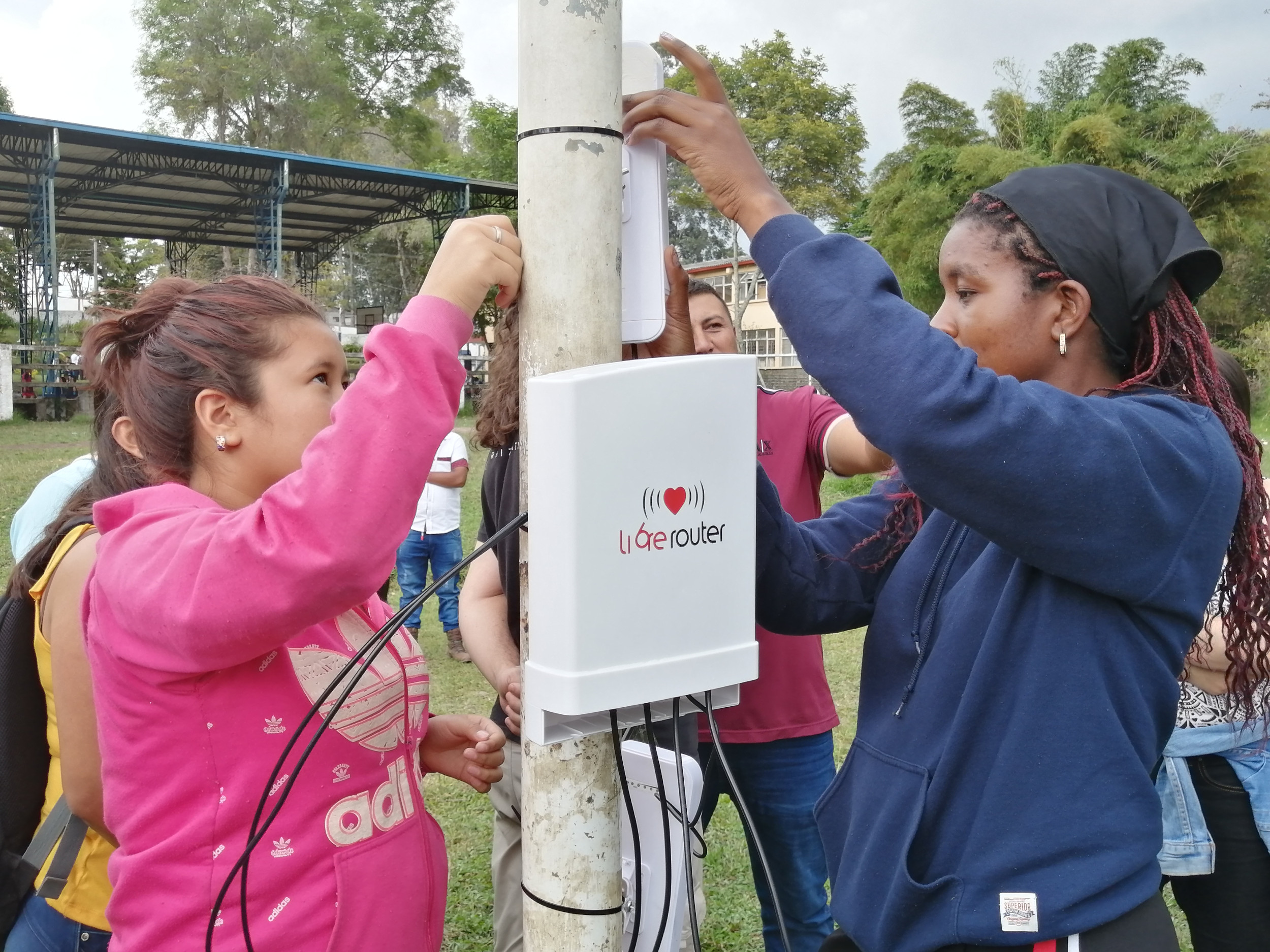 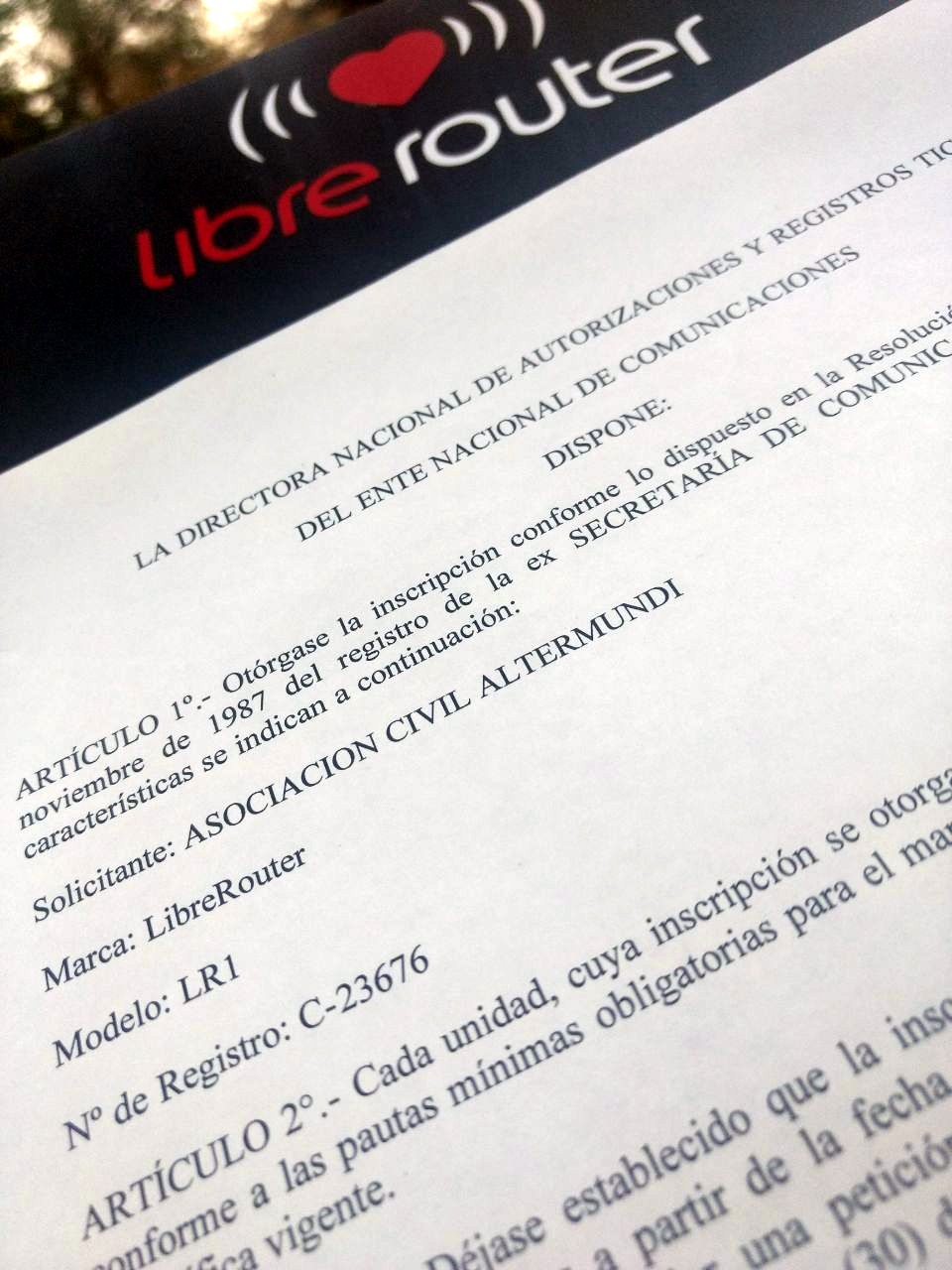 Recently, the Ente Nacional de Comunicaciones (ENACOM) of Argentina granted the certification to the LibreRouter.

This procedure, which took a lot of dedication and joint effort among several actors, is an important achievement. The homologation certifies that the technology built for community networks is at the level of the current regulations, that its features are measured and certified, granting a guarantee of quality and that, in addition, it is possible to be commercialized in Argentina.

In most of the countries of the world it is necessary to carry out a certification of the equipments that make use of the radioelectric spectrum. The certification verifies that the equipment complies with the corresponding technical standards.

In Argentina, the Ente Nacional de Comunicaciones (ENACOM) is the body in charge of the standardization of communications equipment. This standardization is carried out through the dictation of technical standards based on user safety, efficient use of the radio spectrum and compatibility with authorized communications networks and systems.

An achievement of teamwork

Obtaining the certification was a process that implied a sustained work during several months. To achieve this, LibreRouter and AlterMundi worked as a team, together with the valuable participation of the National Institute of Industrial Technology (INTI) and ITon Consulting.
As this is the first time that we have manufactured our own technology, and there are not many other similar experiences, the contributions, services and accompaniment provided were key to successfully completing the certification.

On the other hand, it is worth mentioning that INTI is a decentralized organism of the Ministry of Production and Labor of Argentina that supports the development of the industry throughout the country through the transfer of technology, the strengthening of measurement capacities and the impulse to innovation in all productive areas. At the same time, with more than 60 years of trajectory, it is the national institute of reference in the field of innovation with an important role and prestige in terms of services, quality and metrology for the industry in order to face the competitive technological challenges at an international level.

The relationship with INTI began years ago when they also explored, participated in and accompanied some experiences in community networks. They could not be sustained over time, among other reasons, due to the lack of appropriate technology to deploy networks that are decentralized and managed by the people. That is why now, with LibreRouter in hand and working, they put all their measurement work to achieve the certification of our router created specifically for communities that organize themselves to connect and build their bits of the Internet.

Along with the contribution and excellent work of Miguel Mourad of ITon were the participations that made possible to get the homologation.  We emphasize that the organized work and teamwork among actors interested in the subject was a decisive factor to achieve it.

A certification  that opens doors and proposes challenges

For those of us who work on the LibreRouter Project and AlterMundi, having managed to certificate our technology is both motivating and valuable. On the one hand, because the measurements show that it works and very well and that the technology and open source hardware developed through collaborative work by organizations that are not companies, can live up to the highest international standards.

We understand that this first certification in Argentina shows the need to carry it out in other countries of the Global South where LibreRouter will be used.  We understand these processes as part of the necessary actions to continue on the path to build technological sovereignty and generate favorable conditions for communities to really operate and manage their own Internet networks in rural and disconnected places where the digital divide currently excludes about 4 billion people in the world.

In November, the latest version of LibreRouter arrived in Buenos Aires. SAn was in charge of doing the hardware testing and in this chronicle we told how this important moment was.

First of all, when unpacking the boxes, a review of the shipping was made. This consists of a check to verify if there is any breakage for the trip from China and that nothing is missing. The shipment consisted of 4 routers, their antennas with their pigtails and PoE injectors. Fortunately everything was as Dragino promised us 🙂

Resisting the temptation to plug in the routers, they were opened with a screwdriver and a detailed ocular inspection of the boards and their components was carried out, at the same time as it was recorded with photographs. This part is very important because it allows us to document how the boards associated with a manufacturing lot were received, so that in the future we do not have to remember if a chip was soldered or not, the exact part number of a component, etc.

Except for some small details (there were missing some pins in the GPS module, some LEDs had desoldado in the shipping) everything looked very good.

At last the moment arrived!
Using a laboratory power source and with a lot of excitement, the first LibreRouter was connected to 12V: some LEDs came on, others flashed, all right! A serial to USB adapter was connected to the pins of the serial port of the LibreRouter and it was observed to boot: the network interfaces raised, then the mPCI wifi modules and the onboard WiFi 🙂

Now, what to test?
This version of the LibreRouter changed significantly the organization of the boards. Originally the whole design was a single board and now there are two: the CoreBoard with the QCA9558 processor, memmory (RAM and Flash); and the MegaBoard, a peripheral expansion and power supply board.

Based on the great previous work of measurements made by the community in the first prototype, mostly carried out by Terry Gilliett, we had a roadmap of what to do.

In principle, make sure that what was working was still working and especially to review the changes we had requested from Dragino based on the issues we found in the tests of the first prototype.

At that time we had 20 issues that were documented in github, some of vital importance, others were details or improvements.

To enter the world of hardware measurements, the first thing we needed was to update and install the bootloader and firmware. A few weeks before the shipment arrived, SAn had resumed work in the bootloader to support the new boards, make some improvements and make an open source release of it:

The firmware that was used in the laboratory tests is based on OpenWrt 18.06.01 with modifications to support the LibreRouter

The wireless measurements of reception and transmission gave super well in the 3 radios:

The details of wireless measurements can be read here

In this test some hardware problems arose in PoE and PoE Passthrough. Thanks to the community that develops the LibreRouter we find very fast solutions for these issues. SAn made new tests with these small hardware changes that only required a soldering iron, some resistors and capacitors.

Indoor field testing.
During those days, PyConAr 2018 was celebrated in Buenos Aires and what better opportunity for our router to perform an indoor field test.
We used a LibreRouter to provide Internet to the Django Girls Workshop with near 100 atendees for a whole day.

Our LibreRouter performed great, WiFi coverage in 5.8GHz and 2.4GHz was very good!

Field testing outdoors.
In addition, the field tests of the LibreRouter are being carried out on the QuitanaLibre network, where the it is routing traffic of 20 nodes of the San Isidro network. In this test we are testing how well the antennas work, the box of the LibreRouter, that does not get water, that can be mounted easily, that it is robust, the PoE power supply and the use for long periods in outdoors.

Some documentation of measurements is here and here

Very soon we will have the LibreRouter available to everyone! 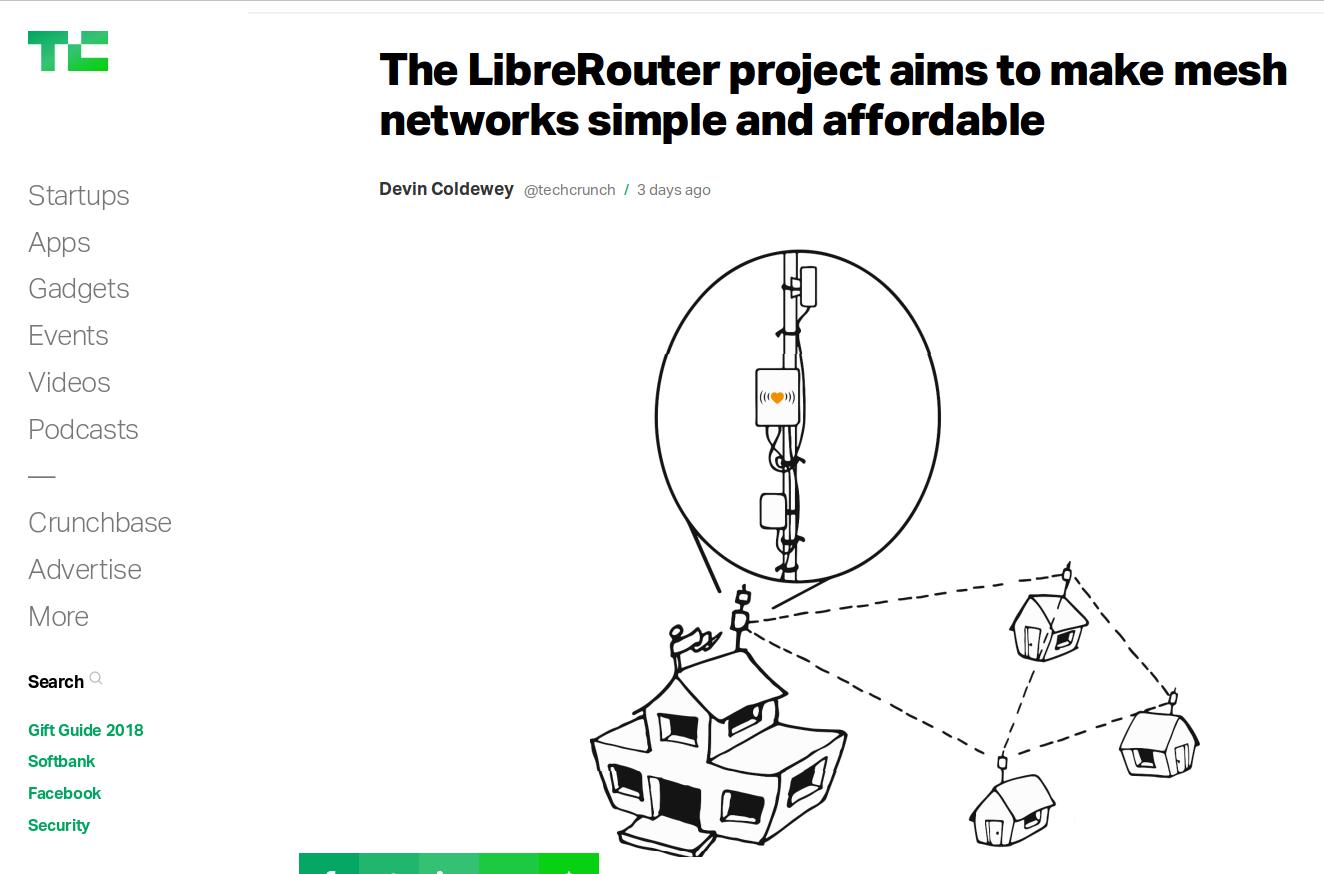 The LibreRouter project aims to make mesh networks simple and affordable by Devin Coldewey for TechCrunch on 19 Dic 2018.

The article can be found HERE